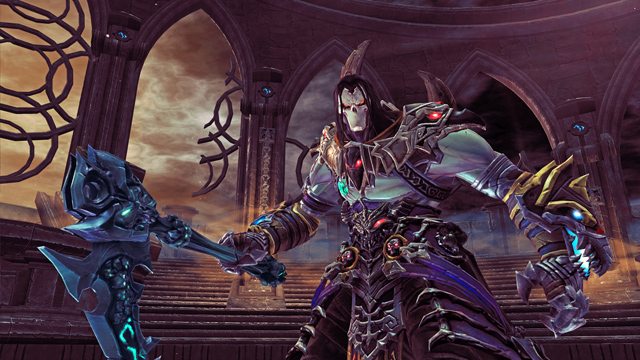 The original Darksiders was a fun romp, though for those well acquainted with the action RPG genre, most will agree that it didn’t exactly break new ground gameplay-wise. Compared to its predecessor, Darksiders 2is a much more ambitious experience that goes beyond a mere improvement. This is not your typical sequel. Sure – plenty of comparisons to Zelda can still be made on the surface, particularly in regards to level design. Beyond that, though, the title feels like it has an identity of its own. Darksiders 2 truly is an experience not to be missed. Read on to find out why.

Nice review. Was wondering when this was coming since you had the icon in your gamertag for a while.
On the idea of a Darksiders 3, I think I'll best wait to complete 2 and judge it from that. Some game series are best just leaving it at the most recent entry. Bioshock is an example that springs to mind since it would have been fine with just the first game.

Quick question which isn't too spoilerish I hope, does the storyline extend much further past the end of Darksiders and also, is there a good explanation for why in the trailer Death appears to fight War but there was no fight against Death in Darksiders? Don't want to know the exact explanation, just if there was a good one or even if that event takes place after the events of Darksiders.

Enforcer Team
Nice review x3sphere! Definitely going to consider picking this up if I have the time. A lot of games coming out this fall / winter time.
Would you suggest that I finish the first game first or can I just pick this one up and not be too lost? I reformatted my computer a while back and didn't keep my Darksider saves.

Staff member
Enforcer Team
Game Info Editor
Not really, the stories basically run in parallel even up to the ending, though there's a very brief scene after the credits that extends the storyline further. Which is why we might see a third game. Also, yeah, the fight against War is explained.

I forgot to mention this in the review but there is a New Game+ option that retains all your loot/upgrades. You can also change difficulties on the fly (something I believe you couldn't do in DS1).


FrozenIpaq said:
Nice review x3sphere! Definitely going to consider picking this up if I have the time. A lot of games coming out this fall / winter time.
Would you suggest that I finish the first game first or can I just pick this one up and not be too lost? I reformatted my computer a while back and didn't keep my Darksider saves.
Click to expand...


You'd be fine without playing the original first at all actually. Doesn't matter which order you play them in really since the stories run in parallel. The mechanics of DS2 are a lot better though so it'd probably be hard to go back to the original after this.

Shame, did want a bit more after the end of Darksiders. Also, really interested in how they work the fight with War into the game/story. I already pre-ordered the game so just waiting on it being released in EU to play it which means I have to wait until next Tuesday. Stupid regional releases on digital platforms. At least I got it for 25% off.

Got the game today put about 3 hours in, they work fighting War near the very beginning and it kinda lame. Really enjoying the game so far, really wish the horse ran alot faster tho there really no point in useing him if he is that slow.
Is out of the game it been a fun ride... Goodbye psphacks.net,qj.net,mfm.com and exophase.com that so much for having me all these years...

Enforcer Team
Well aside from the mess-up that is the PC port of the game there's some more controversy about it.

Xander Davis, a UI designer who is top-notch in my book, helped revamp the UI for this game and worked a lot on the game only to not even be credited in it. You can check out his two tweets on this discovery (which he just found out about) here and here.

EDIT: A new tweet from Xander suggesting that MANY former employees at Vigil are left out of the credits:

"From what I'm hearing now from my former Vigil co-workers, MANY are left out of the credits apparently on Darksiders 2"
Click to expand...


In triple-A this happens all the time. A lot, the rule is you have to be employed when the game ships.
Click to expand...


I was let go a month after DMO changed, they merged the other UI team, & Herb Ellwood swooped in & stole my job. After all my hard work.
Click to expand...


Herb Ellwood only had a contract with THQ. He used the team merging (which we needed to make ship) to secure a salary. Mine.
Click to expand...


Despite revamping 27 screens in 30 days, providing a new art direction, new layout & flow, starting from NONE, their coordination was a mess
Click to expand...


In Beta, you really only want to be bug fixing. If you have to redesign & rebuild your entire UI, you're in a state of emergency.
Click to expand...


And even as you and your team are desperate to solve their problems, and you do it, that still doesn't fix horrible mismanagement to ship.
Click to expand...


Then mass-layoffs & a delay "for quality". I'll bet. Or maybe a game isn't ready to ship period & your house isn't in order. It's on fire.
Click to expand...


When I told the Production Director there was no way their goals fit in the time to ship, he let me go & it was put all on DMO's UI guy.
Click to expand...

When the DMO UI guy was pinned with all of Darksiders 2 UI to ship, he threatened to quit within a day. To keep him, they gave him my salary
Click to expand...

I had just gotten my Texas driver's license in the mail that Sunday. By Monday, I was given the boot after rebuilding all of their UI.
Click to expand...


I said goodbye to all of my friends, completely transplanted my entire life, lived in Austin for 4 months, did my job, & got screwed. Thanks
Click to expand...


Before I got there, I should've asked: who was it that let the UI get that bad so close to ship? The one UI Artist there or the management?
Click to expand...

So I come in, asked to be a messiah to save them from the brink and fix all of their problems there, and I do. Result: fuck that guy.
Click to expand...

Staff member
Enforcer Team
Game Info Editor
That's really a shame. Sadly that's not an isolated case either, this happens a lot from what I hear. Stories like that are the reason I avoided game development as a career path.