Got a good lol out of this
Is out of the game it been a fun ride... Goodbye psphacks.net,qj.net,mfm.com and exophase.com that so much for having me all these years...

who has one? is it worth it, i mean i have a laptop, 2 blackberries and just sold my ipod, i have an interest in it but should i buy one if i have the above? people who own it, is it worth it even though you have a laptop already?
R

my friend got one, personally i don't think its really worth it if you already have a laptop. it is pretty cool, especially jailbroken, but not cool enough to justify it's price tag.
beet

Yeah if you already have a laptop, it's not worth it.

Even if you didn't have a laptop, you're better off getting a good netbook for that price.
Los Angeles Dodgers
Philadelphia Eagles
Los Angeles Lakers

Got a 16gb wifi only model with official firmware 4.2.1...but also have a jb'd iphone with MyWi which is awesome. So no need for ANOTHER data plan. Should I also jb? And which cydia apps should i get?

OUTL4W said:
Got a 16gb wifi only model with official firmware...but also have a jb'd iphone with MyWi which is awesome. So no need for ANOTHER data plan. Should I also jb? And which cydia apps should i get?
Click to expand...


Me too!! I decided to get myself a gift this year. Im planning on jailbreaking it when I get home.
PC - Toshiba Satellite C655 Ram - DDR3 2gig Audio - Skullcandy Metallica edition Steam - covert_Con Games - Bordelands, Left 4 Dead 2

Has anyone tried jailbreakme.com for 4.1.2? Noticed its working now when i visit from my ipad. 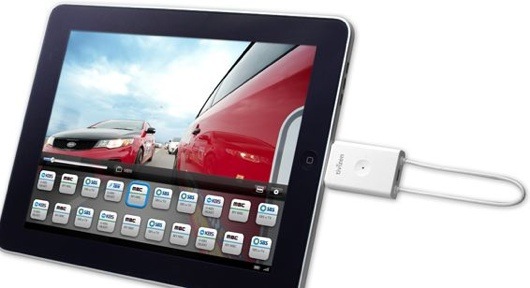 We're live at CES this week, and things are kicking off here in Vegas. The show floor itself opens tomorrow, but electronics manufacturers have already started up with all of their announcements and reveals showing off all of the new hardware for 2011. Here's one interesting gadget: the Tivizen is a device created by Korean company Valups which plus into the iPad's dock connector, and along with a free app, allows for the iPad to recieve digital over-the-air broadcasts of television. That's pretty handy -- depending on standards and availability, you should be able to watch most major broadcast channels in large US metro areas directly on your iPad.

The Tivizen is priced at $99, which puts it in line with something like the EyeTV. Hopefully not for too long, though -- the device requires its own battery, which only lasts a couple of hours. If you've been looking for a way to watch a broadcast show you can't otherwise see, specifically on your iPad, the Tivizen might be just what you're looking for. Odds are there's some other way to watch that video on Apple's tablet, no?
Click to expand...

Not the most attractive of accessories imo. I'd like this more if it were redesigned as a right angle kickstand, with the antenna as the stand. Still though, it's intriguing.

Isent this what sling player already does?
Is out of the game it been a fun ride... Goodbye psphacks.net,qj.net,mfm.com and exophase.com that so much for having me all these years...

Seth said:
Isent this what sling player already does?
Click to expand...

I have an iPad. I had been taking my laptop to work, which in a group home requires a bit more time sometimes than I ideally have to look something up on the quick. Figure anywhere from 1-5 minutes to boot, grab a browser, and find something on the laptop VS literally under a minute on the iPad. With the exception of flash video, the iPad can do everything I'd need at work that my laptop could, except maybe burn CDs.

Yeah....im a geek plus a sucker for accessories and i think this actually looks pretty cool and prolly pick one up....made of solid-milled alluminum.

[yt]Ekko7eM8m9A[/yt]
It uses a suction cup to keep it attached and conductive foam makes the capactive touch screen register the touch. Suppose to go on sale late jan for $24.99.
http://www.thinkgeek.com/gadgets/cellphone/e75a/

It does look cool, but I'll wait for the knockoff versions. Just because the iPad is bloody expensive, I don't think all the accessories should be too.

Anyone see this? How does Apple get progressively worse each year at hiding these things?
I piss everyone off at some point.
S

It may be done somewhat deliberately. Leak a few design ideas, watch the various forums to see what's liked and what isn't. Cheaper than hiring research groups, since the fanbase will do the work for them.

OUTL4W said:
[yt]Ekko7eM8m9A[/yt]
It uses a suction cup to keep it attached and conductive foam makes the capactive touch screen register the touch. Suppose to go on sale late jan for $24.99.
http://www.thinkgeek.com/gadgets/cellphone/e75a/
Click to expand...


Only 25 bucks? I think i'll pick one up to. The virtual joysticks are pains in my ass most of the time.
PC - Toshiba Satellite C655 Ram - DDR3 2gig Audio - Skullcandy Metallica edition Steam - covert_Con Games - Bordelands, Left 4 Dead 2

Am I correct in assuming this would also work on any touch screen with a virtual stick? Not just ipad.

Probably, at least if it uses a similar screen to the iPad.
Z

Anybody get slower than usual performance with YouTube on the iPad?

Havent had that issue...connection issue?

I see xbmc finally makes its way to ipad & iphone4.


A few minor bugs here and there but still looks promising.

Off topic:
If you like playing the retro classics on the ipad...may i suggest adding this repo:
Http://cydia.xsellize.com/
And look for snes A.D.X.+ which allows you to play all the snes/nes classics on the ipad and includes built in rom downloader. One of the added benefits of this is that it also allows me to use my Wii remotes as the controller for games.