Micro-windmills may one day charge your phone battery 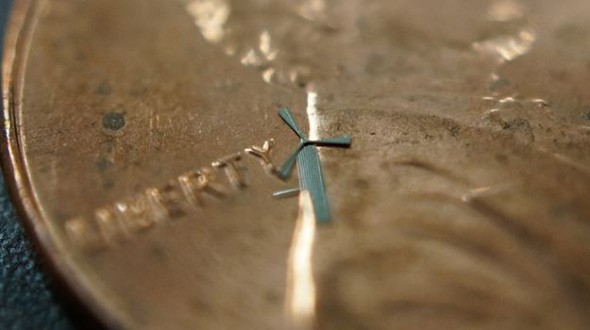 Energy generated from wind turbines or windmills is seen as a very green source of power. It produces no emissions and doesn’t rely on any raw materials that will run out. You simply need a big wind turbine positioned in a relatively windy area.

Such wind turbines can be a bit of an eye sore, though, and there are limited locations where they can be erected, but nobody said wind turbines had to be big. Research being carried out at the University of Texas Arlington is looking at ways to use windmills so tiny, you could fit ten of them on a grain of rice. And yet, they could one day be used to recharge the batteries in your mobile devices.

These so-called micro-windmills have been designed by researchers Smitha Rao and J.C. Chiao. They are created using an advanced semiconductor manufacturing process offered by WinMEMS Technologies Co. with each micro-windmill no larger than 1.8mm at its widest point. Each one still relies on a source of wind with which to generate energy from, but as they are so small artificial wind, like that generated by a person moving their hand through the air, suffices.

Each micro-windmill is manufactured from nickel alloy to stop them being brittle, but do rely on an advanced fabrication system. With that in mind, UT Arlington is holding on to the IP rights while WinMEMS handles manufacturing and commercialization of the technology.

​
For consumers, it means the potential for a revolution in the way we recharge our devices. A case for your smartphone, tablet, or laptop could be coated in these micro-windmills which then spin even at the slightest movement of air around them. With the complementary electronics embedded into the casing, we get a passive recharge system that keeps your battery topped up throughout the day. And if you need a bigger charge, then just start moving your device more vigorously through the air.