First off, you have done an excellent job with the StarCraft 2 achievements. They all appear to show the correct names and pictures which is more than can be said for blizzards own site. So quite how you have managed that is beyond me. Well done.

However there does appear a slight oddity in that stacked achievements only show you as completing one in the 'chain'. This creates the odd situation whereby the first in the chain is often deemed the rarest / highest value. 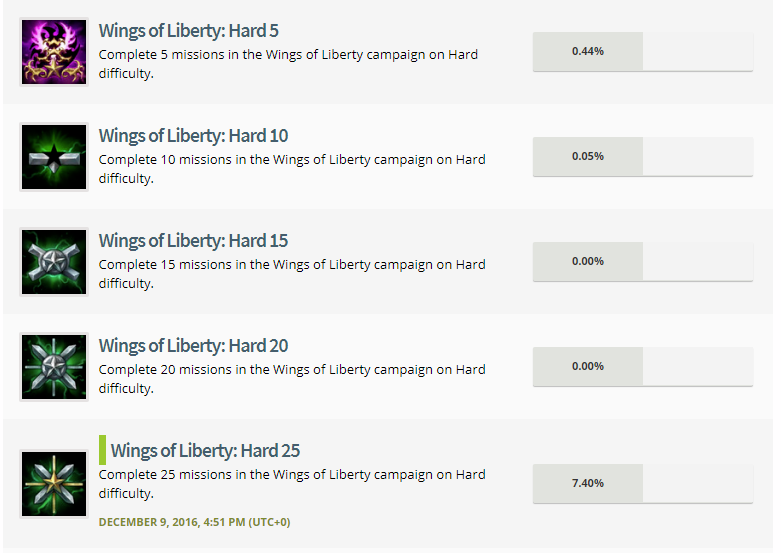 as you can see I have the "Hard 25" achievement, but apparently not the 5, 10, 15 or 20 despite those being prerequisites to the 25.
This is reflected in the completion stats, as apparently 0% of the player base as the Hard 20, presumably because they all have the Hard 25.

Not sure if this can be addressed, but it would be awesome if it can.

Thanks for the good work.

Not sure if this helps any, but I noted the following, here is another players profile that earned the Lost Viking achievements along time ago, as you can see they have only got credit for the 500k, not the 125k or 250k:

I recently achieved these, but there was time for scans between my completing them, and I have credit for all 3:

I am wondering if the API only reports the highest achieved? As I achieved these while already linked to Exophase, and with sufficient time between each one to allow a scan, I managed to get credit for all of them?

Not sure if it helps any, but just thought Id post findings.

Guessing this isnt something that can be 'fixed' from the Exophase side?

The same problem exists over on MetaGamerScore.

I am still thankful that you guys somehow extract the proper achievements from the garbage data that shows on blizzards own site.

Staff member
Enforcer Team
Game Info Editor
It might be fixable, I haven't had a chance to really dig into it yet. The API gives an numCompletedAchievementsInSeries value which looks like it can be used to determine how many other achievements in a series were earned. In your case, it reports 5/5 for that example so it's easy to assume all the other achievements are earned.

However, if you've only earned like 3/5 of the achievements in a series I'm not sure how to determine which ones yet. The API only lists the latest one as earned. At least for this example it appears the IDs are sequential so if 3/5 achievements in a series are earned, you can assume everything up to the third achievement is earned when ordering by the ID. I need to do some testing to make sure that works in all cases though.

Thanks! Appreciate you looking.

IF the API returns 3/5 completed, would it be safe to assume it is Hard 5, 10 & 15?
I would imagine all InSeries achievements can only be earned in order?

Keep up the great work as always.

Curious if you managed to make any progress on this one?

Just opt-ed in to the new Beta site (which looks fantastic. Love the dark theme, love the new layout showing EXP etc - GREAT work) and I notice that it appears to show the SC 2 "game score" below SC2?

Mine shows as 9710, while on blizzards it shows 9850 - assuming a score of 10 for each achievement looks like I may have 14 of these stacked ones on my profile.

Not sure any of this helps, or anybody cares. I appreciate SC2 is an old game now.

Love the site, great work. Keep it up.

Staff member
Enforcer Team
Game Info Editor
It’s still being looked at. I still need to do more testing across other profiles to make sure there are no issues before deploying any changes. When I have an update I will share.

Thanks for the feedback on the beta, glad you like it

I've been making some improvements to the Blizzard scanner, and this seems to be fixed now? In particular the stacked achievements and the earned points total.

I did notice some of the achievement icons are showing up as a black box, unfortunately, this seems to be an issue on Blizzard's side - the image URLs they provide are currently broken.

At first I thought maybe my profile had not updated yet as the total number of earned achievements has not changed. However on closer inspection, looks like it worked! The stacked achievements do all seem to register now. Below a new capture of the Liberty Hard achievements I posted in the original post.
Now all show achieved. I was expecting they would all carry the same time stamp (and 10 & 15 do) but the rest show different times.

I guess that perhaps before, although not showing as "achieved" with a time stamp, it was being included in the overall achievement count? 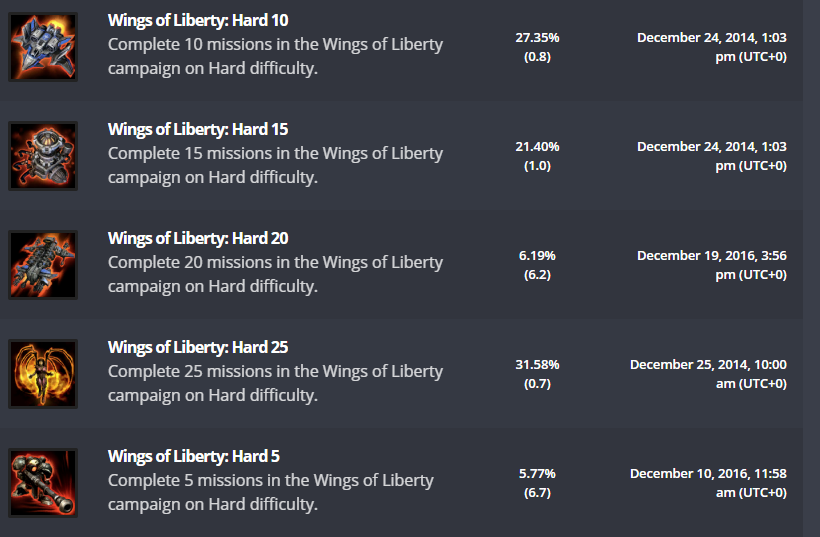 I am not sure what the number below achievement count is, I had assumed it was trying to read the "Star Craft 2 game score":

This went down rather than up since the change? (it does not match current value on SC2, but before it didn't either)


Again, thank you for the great work. Its really appreciated it.

Staff member
Enforcer Team
Game Info Editor
Yeah, we had the overall earned achievement count correct before, just the individual achievements were not picked up. Yes, the point count did go down. There were some achievements that had incorrect point values (seems they changed them at some point), it updates them based on whatever is current in the API now.

I noticed these two, were originally scanned in awhile back, however they aren't showing up as earned in the API anymore. Do you know if you actually earned those achievements? The API says they are "in progress" now, but not earned. I wonder if there are other achievements like this that we did not pick up and now aren't displaying as earned - but the game itself didn't remove them from the point totals.

I tried to check on the SC2 site to see where the point discrepancies are, however it doesn't seem to be loading the achievements page for me anymore. I think this page should load your profile achievements but doesn't show anything now: https://starcraft2.com/en-us/profile/1/1/8673364/achievements

Yes I have both of those earned.

And yea...ever since the 10th Anniversary update, the starcraft2.com website is even more busted than it was before.

I can load my profile summary page, but nothing more detailed related to achievements.
Its compounded that I have 2 profiles, the one on US which I only use to post on the forums, and the my actual profile on EU server.
https://starcraft2.com/en-us/profile/2/1/5447971
Same problem on both. (despite the US one having nothing earned anyway)

Again, I really appreciate your work on getting SC2 tracked. Your doing a much better job than Blizzard have.
I did raise it months ago on there support site, but I don't think anything will ever be fixed there.