​
Welcome to the Exophase Destiny 2 Thread Guardians. This thread is for all discussion pertaining to Destiny 2. Similar to its predecessor, Destiny 2 is a first-person shooter game that incorporates role-playing and massively multiplayer online game (MMO) elements. The original Destiny includes on-the-fly matchmaking that allowed players to communicate only with other players with whom they were "matched" by the game. To communicate with other players in the game world, players had to use their respective console's messaging system. Destiny 2 features a more optimal way of matchmaking called "Guided Games", which allows players to search for clans who may need additional players for activities, such as strikes or raids. Like the original, activities in Destiny 2 are divided among player versus environment (PvE) and player versus player (PvP) game types.

GUARDIANS
Guardians will have the opportunity to choose between three different classes when choosing their characters:

​
Hunter - Hunters continue to have access to the Solar-based "Gunslinger" sub-class from the original game and the Void-based "Nightstalker" sub-class from the original's The Taken King expansion, both with gameplay changes. The Hunter's new sub-class for Destiny 2 is the Arc-based "Arcstrider", replacing the "Bladedancer" sub-class of the original. Arcstrider's super, "Arc Staff", focuses on an electrified staff and a large amount of rapid mobility. Forsaken adds three new supers for each of the Hunter sub-classes: "Blade Barrage" for Gunslingers, focusing on throwing a volley of flaming knives; "Spectral Blades" for Nightstalkers, allowing players to see through walls and attack with Void daggers; and "Whirlwind Guard" for Arcstriders, which allows players to block projectiles by spinning their Arc Staff.​
​
Titan - Titans continue to have access to the Arc-based "Striker" sub-class from the original game and the Solar-based "Sunbreaker" from the original's The Taken King expansion, both with significant gameplay changes. The Titan's new sub-class for Destiny 2 is the Void-based "Sentinel", replacing the "Defender" sub-class of the original, although the Sentinel sub-class can create the Defender's Ward of Dawn shielding bubble if this option is selected. Sentinel's super, "Sentinel Shield", allows the player to summon a shield that can block enemy fire and be used offensively (similar to Captain America's shield). Forsaken added three new supers for Titans: "Thundercrash" for Strikers, allowing players to launch into the air and slam onto the ground; "Burning Maul" for Sunbreakers, which players wield a large hammer than can unleash flaming tornadoes; and "Banner Shield" for Sentinels, which unleashes a protective barrier that allows other players to shoot through.​
Warlock - Warlocks continue to have access to the Void-based "Voidwalker" sub-class from the original game and the Arc-based "Stormcaller" sub-class from the original's The Taken King expansion, both with several changes. The Warlock's new sub-class for Destiny 2 is the Solar-based "Dawnblade" with a super called "Daybreak", replacing the "Sunsinger" sub-class of the original. The Daybreak super allows the player to make Solar Light blades to strike enemies from mid-air. Forsaken gives Warlocks three new supers: "Nova Warp" for Voidwalkers, allowing players to warp around the battlefield and unleash a Void explosion; "Chaos Reach" for Stormcallers, which unleashes a beam of Arc energy which can be turned off at any time to conserve Super energy; and "Well of Radiance" for Dawnblades, allowing players to create a healing and empowering aura for players to stand in.​
​ 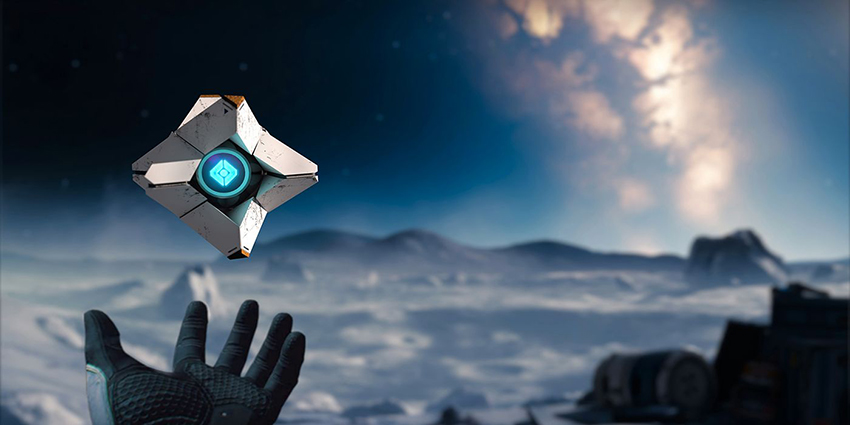 "Every Ghost is born knowing that we have to find our Guardian. We don't know what they look like. Not on the outside, anyway. On the inside, I'd always known who you were. And that together, we could be something more. When you think about everything we've seen, everything we've done, I feel like... I made the right choice. [...] Thanks - you know - for being my Guardian."​
PLOT
One year after the events of Destiny: Rise of Iron, the Red Legion faction of the Cabal, a military-industrial empire of massive amphibians, attack The Last City with overwhelming forces, led by their emperor, Dominus Ghaul. Ghaul, believing the Traveler was wrong in giving humanity Light, succeeds in stripping the Guardians of their powers and forcing them to flee the Tower. Scattered and powerless, the Guardians must acquire new powers to face Ghaul and the Red Legion, venture to new worlds in the Destiny universe, and reclaim the Last City.

EXPANSIONS
There have been a total of 7 DLC's for Destiny 2
Curse Of Osiris
Destiny 2's first DLC pack, Curse of Osiris, was released on December 5, 2017. The expansion added new content and focuses on the character Osiris from the lore of the original Destiny and for whom the Trials of Osiris PvP mode in the original was named. The expansion takes players to the planet Mercury with its own patrol mode. Additionally, the EXP-level cap was raised to 25 and the Power level cap was raised to 330. In addition to the character Osiris, his Ghost named Sagira was added with a female voice, as well as the character Brother Vance from the original game, who is now the Non-player character (NPC) of Mercury in The Lighthouse (formerly an exclusive social space in Destiny for those who went flawless in Trials of Osiris). There is also a timed-exclusive Crucible map for PS4 players called Wormhaven. Instead of an entirely new raid, a new feature called raid lair was added, featuring new areas to the existing Leviathan raid and a different final boss.

"The courage to walk into the darkness, but strength to return to the light."​
The Goat House / Twitch Stream

Recently just started playing this again. Figured I would make a thread for discussion of the game. Let me know your thoughts on the game, and if you want to join the clan I have running feel free.

Here is the full Live Stream from Bungie

Working through the DLC for Destiny 2 that I have not yet completed. Love this series.
The Goat House / Twitch Stream