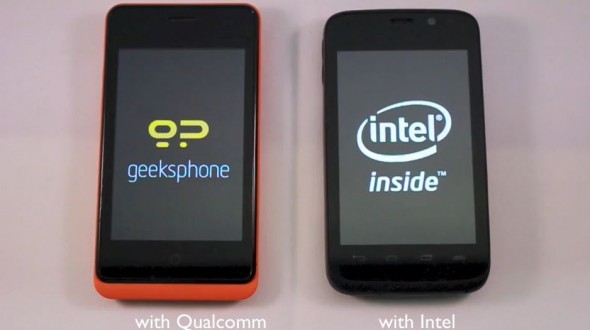 Spanish smartphone maker Geeksphone has a new device on the way running Boot2Gecko, the core of the Firefox OS experience. Unlike its first two models, however, Geeksphone’s latest is going to offer higher-end features.

The smartphone is called the Revolution, and you’ll only find a placeholder page on the Geeksphone website right now. However, the company is talking about it in their forums — and they’ve even posted a video so you can see how the Revolution and its Intel processor fare against the humble Keon.

It’s not really a fair fight: the Keon’s 1GHz Snapdragon isn’t a match for any of Intel’s mobile processors. It’s a decent chip to use when you’re building a $125 phone, but it can’t compete with an Atom.

The Revolution has been upgraded in one other important way. Geeksphone says that it will arrive with a 4.8-inch display, the largest so far for any Firefox OS or Boot2Gecko phone (at least one that didn’t start out as an Android handset and was later flashed by an enthusiast).

While specifics are scant at this point, we can take a well-educated guess at the Revolution’s price. Geeksphone is allowing customers that have paid for a Peak+ to switch to the Revolution at no charge. Since the Peak+ originally went for €149, or about $200, the Revolution is probably the same.

They won’t be taking a bath on the gratis upgrade, so it’s a good bet that Geeksphone will retail the Revolution for right around $200. That’s a good price for an Intel-based smartphone, and it’s also well within reason. While the Atom isn’t common in low-end phones, it’s not unheard of.

You can pick up the ZTE Geek on Amazon for $219, and it sports a slightly larger display. Will the upgraded hardware and a price point that’s still very reasonable be enough to get folks excited about Boot2Gecko and Firefox OS? Only time will tell, though it would be nice if Geekpsphone could get a carrier on board so that they could actually start using the Firefox OS branding on their phones.