The latest update to Nvidia's portable gaming device ups the resolution for some compatible PC games via streaming. The GameStream functionality originally launched in October, but at the time, it was only possible to stream those games from PC in 720p resolution at 60 frames per second.
The over-the-air update will add 1080p streaming support for games like Assassin's Creed IV: Black Flag and Battlefield 4. 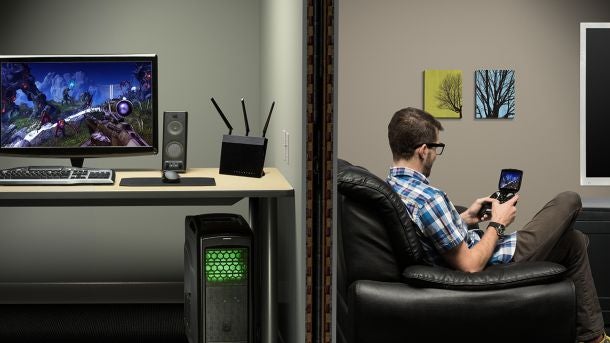 Nvidia has also made some adjustments to the Gamepad Mapper of the Shield. More than just assigning Shield buttons to the touch-based controls of Android games, the Mapper can now be used to handle motion-sensitive controls with an analog input. For example, a game like Temple Run requires tilting your Android device to activate the gyroscope--now you can simply move an analog stick on the Shield to perform the same action.

More impressively, you can now map movement and look controls in Android games to the two thumbsticks. The change should make playing first-person shooters on the Shield feel more natural.
Nvidia also announced its GRID cloud streaming--allowing you to play PC games on your Shield without PC access--is in beta for Shield owners in Northern California. You'll need a hefty broadband connection, a 5 GHz wireless router, and a 40ms ping to the GRID servers in San Jose, though.

Well that is pretty awesome. The new ps5 I guess allows 4k streaming. I do not know just assuming. It is like when I decide to buy a gaming console I always think that pc would be better but again I think about the wireless smooth controllers which pc do not allow us to use. It is always fun to play fifa on a wireless controller rather than keyboard.
You must log in or register to reply here.
Share:
Facebook Twitter Reddit Pinterest Tumblr WhatsApp Email Share Link
Top