5 things to know about Call of Duty: Modern Warfare 3

If you're into military shooters, you're pretty much in heaven right now. EA's well-received Battlefield 3 survived a rickety launch last week to enjoy the biggest first week sales of any game this year, and just around the corner lurks an even bigger operation: Call of Duty: Modern Warfare 3.

Ruining work productivity on November 8, the game is widely expected to continue the franchise's trend of breaking its own entertainment launch records. First it smashed records with Modern Warfare 2, then went ahead and obliterated those with last year's Black Ops. Can it pull off the three-peat?
We won't know for certain until after the midnight launch parties die down a bit, but we know plenty about the game already. Here are five things you should know, too.

It's a worldwide war. 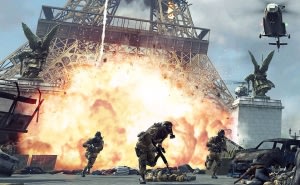 The new game's plot picks up where Modern Warfare 2 left off, with the Russian Federation hell bent on wreaking havoc across the world. Sounds like a bummer, but if not if you dig virtual travel.

It's got new modes.

If you play the single-player at all, that is. The majority of players will probably be picking this bad boy up purely for the multiplayer. The good news is that they'll have some cool surprises waiting for them.
One of the game's buzziest new modes is 'Kill Confirmed,' which plays out like a typical Team Deathmatch, but requires that players snag the dog tags of downed enemies for the kills to count. Should your teammates grab your tag before the enemy does, the kill is denied. Take out four guys with an amazing grenade toss? You better grab their dog tags, too, or it doesn't count.
If you prefer to play co-operatively, the new 'Spec-Ops: Survival' mode is the way to go. Waves of enemies will come pouring in at your and your buddies; take them out to gain funds, which you can then spend on a wide range of defenses. Think Gears of War's Horde mode or Halo's Firefight and you've got the picture.

It's a package deal. 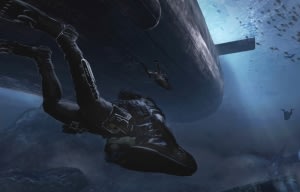 Playing multiplayer in past Call of Duty games was all about racking up Killstreaks, which would grant certain abilities based on how many kills a player could string together without dying. While that will still be part of Modern Warfare 3, it's gotten a bit more complicated and a whole lot cooler.

Players will now choose one of three 'Strike Packages' — Assault, Support or Specialist — which reward different play styles. Prefer to focus on completing objectives rather than just gunning down foes? You'll rack up "Pointstreaks" either way, which will unlock different abilities for the three different packages. The result is a game that rewards more play styles — and more players.
It's a number-cruncher.
Launching alongside Modern Warfare 3 is Call of Duty: Elite, a service that keeps track of every bullet fired and offers all sorts of advice to turn you into a Call of Duty pro. It comes in two models: a free version, which grants access to robust matchmaking features, stat tracking and loads of guides and tips, and a subscription-based service that includes all sorts of cool extras for the Call of Duty die-hard, such as early access to downloadable content, daily tournaments with prizes, clan benefits, and more. Check out this handy chart for the specifics.
Should you pony up for the extras? It runs $50 a year, so that really depends on how seriously you take your Duty. Either way, expect Elite to make you a better player.
It's on pace to break records. Again.
Pre-orders are a good indicator for how a game might fare at retail — and Modern Warfare 3's pre-orders are already pretty impressive.
Earlier this year, both GameStop and UK retailer GAME noted that Modern Warfare 3 was on pace to outperform Black Ops, and though Activision itself has remained coy on the actual pre-order figures, they seem impressed with how it's shaking out.
"Call of Duty: Black Ops set records for the most pre-orders of a game," the company told us in a statement. "Call of Duty: Modern Warfare 3 is tracking substantially ahead of that number."
Sound familiar? That's because Black Ops managed to outpace Modern Warfare 2 as well, and went on to breaks that game's launch sales numbers.

Yeah I heard the dogs with explosives on it bit, and almost shat myself haha. Looks pretty good, I had some of my best times in MW2 playing Spec Ops with my buds.

Enforcer Team
I've been playing a lot of Black Ops and am getting pretty excited for something new. As much as these games don't change very much, I think the changes they do make work very well.

Enforcer Team
Might be skipping out on this one and just dedicating time to Gears of War 3 and BF3 - although I won't even have much time for that this fall since I have a jam-packed schedule. This will be the first COD title I won't be buying right away and might not for a while. Sure it's cool and all but I'm still able to have fun in Black Ops and haven't gotten too bored of it yet (although I only play with friends)

In the last five seconds of clip...did I see juggernaut killstreak?

I'll be downloading it. I can't find myself to buy CoD games no more.
I got Gears and Battlefield pre-ordered already and I'll most likely be playing those games more then this one.
Los Angeles Dodgers
Philadelphia Eagles
Los Angeles Lakers

Looking forward to this quite a bit, but I don't think it will have anything on BF3 or GoW3.

You can become a juggernaut as a killstreak? That's badass, totally buying.

I heard this game was released two years ago?


Proxy mines, interesting. The overall theme of the trailer with a rivalry with an enemy sniper in black was nice. Still won't be buying it though.

I will be buying it, but not straight away - i will let the fury subside a little...

slicer4ever;209383 said:
So your options:
2. Fuck it, and just assume that w/e happens was part of that random jumble of words that they said earlier(and hope the game is very easy to understand where to go).
Click to expand...

Im watching the CoD XP event, I'm getting Elite. You get a new map every month.
It's 50 bucks a year but if you plan on getting all DLC, you save 10 bucks already plus you get all the features of elite and all harden editions of MW3 get a year free of elite.
Los Angeles Dodgers
Philadelphia Eagles
Los Angeles Lakers


Thats funny...the guy gets all the way across the map only to be killed by a camping sniper.....typical...

Wonder if this was taken from theatre mode?

Enforcer Team
I'm not a fan of seeing the heartbeat sensor make a return, but having watched the new vids from today, I can't wait to get my hands on this.