I also have dead space2 for 360 and was wondering if anyone else tried dead space HD for ipad?
[yt]JRWQI6QhumU[/yt]

Just an fyi that greenpoison untethered for 4.2.1 has been released

OUTL4W said:
Just an fyi that greenpoison untethered for 4.2.1 has been released

Also possible specs for the ipad2?
http://www.appleinsider.com/article..._include_hd_video_3mp_camera_displayport.html
Click to expand...

and the windows version was released!! Im jailbreaking mine later this week, i got to much superbowl stuff to get in order today!
PC - Toshiba Satellite C655 Ram - DDR3 2gig Audio - Skullcandy Metallica edition Steam - covert_Con Games - Bordelands, Left 4 Dead 2

Also a rumor that the next ipad will be minus a home button and the task manager will be a 4 finger gesture pinch.

[yt]6xj_PIysATI[/yt]
MacRumors reports that iOS 4.3 Beta 2 includes and image, under the sheets, of a few new iPad icons that we haven't seen before. The image is of the iPad homescreen with 3 new apps. Facetime, Camera, and even Photobooth are included in this firmware.

Now this doesn't mean that the iPad 2 will have a rear camera, but it definitely means that it will have a front. You will now be able to cross-Facetime with all the other iDevices including Macs. I don't think Apple would have let the iPad go without a camera for another year.

The article goes on to say that there were filters included in the firmware as well "Thermal Camera, Mirror, X-Ray, Kaleidoscope, Light Tunnel, Squeeze, Twirl and Stretch". These are presumed to be for Photobooth, which should be somewhat similar to what we see with the Mac app.

Well, we did it everyone, the iPad 2 is now officially getting a front facing camera!

Has anyone tried everyair allowing you to play Pc, ps3 games and soon 360 games from the ipad.

Im sure some people would be intested in playing World of warcrack on the ipad....except me....which it shows a video in the link.

In case anyone is interested GarageBand and imovie are up in the app store....sweeeet.

Garage band shows up in the app store on my ipad and works but imovie doesn't show up at all. And I am absolutely in love with the drums....

If anyone gets an ipad1 for cheap here are a few must have tweaks...
[yt]JMrj12guqPE[/yt]

The vid is a lil jerkey cause of using display recorder for ipad along with the ipad wallpaper I was using. Used ReelDirector to edit.

With the release of ipad2....accessories for the ipad1 are C H E A P. Has anyone gotten this:
http://www.boxwave.com/products/truewoodipadcase/apple-ipad-true-wood-ipad-case_3779.htm with free shipping within the US.
Just wondering if it's as puuuurdy as it looks and what normal wear & tear issues are happening if any.

Also an fyi...the hdmi adapter for ipad2 will work on ipad1 with a few apps that natively output to tv. But with displayout from cydia...it will output from all apps to tv.

N.O.V.A. 3 being developed with Unreal Engine 3

Gameloft has confirmed what we already knew down here in the Rumour Mine - it's busy working on four games utilising Epic Games's Unreal Engine 3. But the Paris-based publisher hasn't revealed what those games are.

Word has it that shooter sequel N.O.V.A. 3 is among the four titles built around the engine and will be out later this year.

It's not surprising that a third game in the series is in the works, since the first two instalments did phenomenally well both critically and commercially. However, switching to Unreal Engine 3 is an interesting move. N.O.V.A. 2 looked awfully good last December, so who knows what it'll look like this time around.

No announcement is planned for the game until late in the year, so sit tight.
Click to expand...

I'm still waiting for the low end iPad to get like, sub $300. Everyone I've seen selling it so far is trying for $400, which is complete bullshit for a used iPad. That's the same price as a new one essentially.

Bran said:
I'm still waiting for the low end iPad to get like, sub $300. Everyone I've seen selling it so far is trying for $400, which is complete bullshit for a used iPad. That's the same price as a new one essentially.
Click to expand...


You could give the NotPad2 which looks like the closest competition to the dominance of Apple over the tablet market.


"Affordable", " amazing battery life", "cheapest tablet on the market". Why not give it a go, see if you think it really can compete with the iPad 2?

For a limited time only, you have the chance to win one of five limited edition NotPad 2's, visit the following link to find out more:

Not sure if anyone has had a chance to play around with this tweak... if not you should give vWallpaper2 for ios4/arm7 beta a try.
Can be found by adding this repo:
http://i.danstaface.net/deb/
it's only in beta stage now but does look promising...

Basically it's live wallpapers 2.0. It has particle effects, magic fingers, icon effects, interactive widgets, "skyrockets", 3D rotating texts, and also allows you to show video on lockscreen. It also will not conflict with the barrel tweak as perpagehtml+ did. You also don't need to respring your device everytime you add/remove a widget.

And if anyone runs across any more widgets please share here. Or know anything of HTML coding could write a few.
Here are multiple widgets that I've found and tweaked.....all freely available. I take no credit in creating them only tweaking to my liking. After unzipping, Place the widget folder in:
Var/mobile/media/vwallpaper2/webviews

By default it looks for Widget.html, widget has to be captialized but you can also direct it to look specifically for the correct html file as well. For the ps3 & 360 widgets just replace my name with yours.

Also add this repo for more vWallies just be sure they say iPad in title:
PizentuDeWind's Repository - MyRepoSpace.com

Vid of particle editor for vwallpaper2 which can be any png file of your choosing...

[yt]q9iZf1USdZg[/yt]
It may show iPhone but looks much better on iPad... 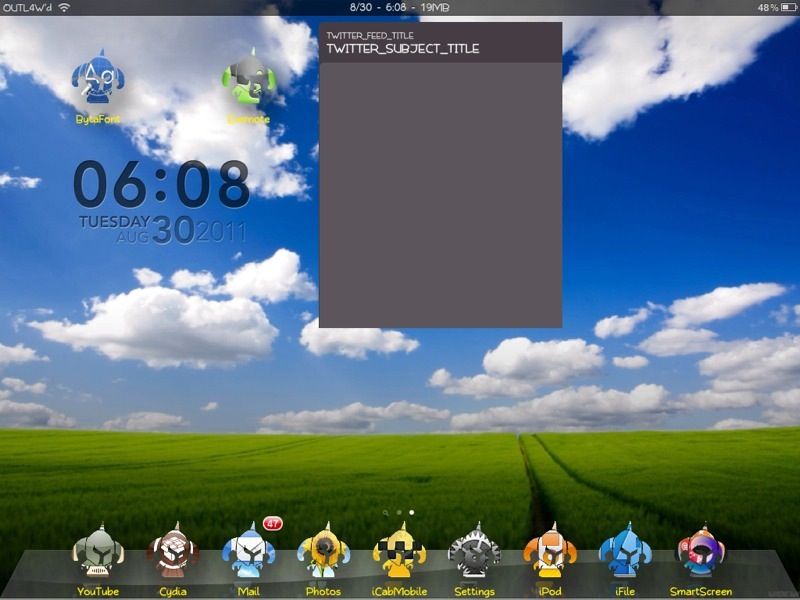 by changing the color key (obtainable through google, gimp, or photoshop) you can customize the color combinations.
I did not create these but props to who did....